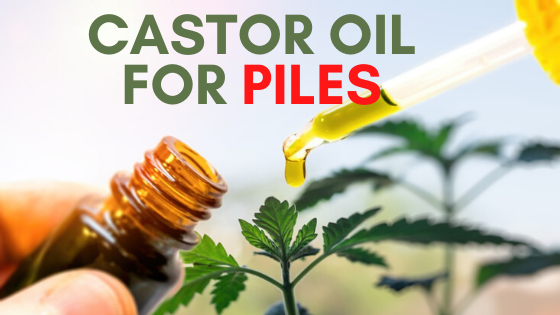 Castor Oil could be really helpful in getting rid of piles. In this article we will learn how to use Castor Oil for Piles, it’s benefits and side-effects. Castor Oil is not less than magical wand for people suffering from Piles and Fishers. Castor Oil is a laxative, first mention of its use in history is 3500 years old.

According to a report from Rajiv Gandhi University of Health Sciences, around 40,723,288 people are suffering from piles which makes it one of the most common and dangerous diseases people suffer from.

Haemorrhoids is a common disease, there are many ways by which you can cure this disease at home by using proper home remedies. Castor Oil is known for distinctive characteristics and its effectiveness as home remedy for piles.

One of the popularly used methods which are mostly used at home to cure piles is by applying castor oil directly to the infected area and keeping it for overnight. Several benefits of this oil which has proved to be very beneficial in the treatment of hemorrhoids and piles but some side effects of this oil have also been reported.

We will be discussing everything related to Castor Oil for Piles. So you will get a clear understanding of this oil.

In this article, the following points will be covered:

Piles are the swelling of hemorrhoids that occur inside and outside the anus and anus canal. Everyone has haemorrhoids which help in the control of human feces.

People of every age suffer from piles where people above 40 are the most common one while those below 14 are the rare one.

What are the causes of piles?

We still don’t know the real reason behind piles but there are some factors which are believed to be responsible for this condition. One of the most common factors believed to be the reason is that due to the increased pressure in the abdomen, piles occur.

Some other factors may include constipation, diarrhea, obesity, sitting for a long time on the toilet, etc.

Primary causes are believed to be lack of fiber in the diet, constant heavy lifting, pelvic floor dysfunction, etc.

What are the symptoms of piles?

In 40% of cases, people don’t have any kind of symptoms because they even don’t know when it occurred. Generally, piles often shrink on its own. But in most of the cases, which is usually very painful while urinating.

Some symptoms which people face are:

Why we should use castor oil for piles home remedy?

Castor oil – A vegetable oil produced from castor beans. It is widely used in cosmetic and medical purpose. For its anti-inflammatory and laxative properties, Castor is believed to be very beneficial for face and skin. This home remedy on piles could be really helpful for people looking for remedies for piles at home.

The main benefit of castor oil is that it is a mighty laxative which relieves occasional constipation when taken orally. Thus it helps in preventing piles. But overuse of castor oil can lead to abdominal cramping, itching, vomiting, diarrhea which can worsen the condition of piles.

So, it is advised to use castor oil with tea tree oil because it dilutes the oil which reduces swelling and inflammation. Along with haemorrhoids, Castor Oil is really helpful in curing Lips damage as well.

Castor oil may be the most commonly used home product to treat haemorrhoids . It can shrink haemorrhoids along with reducing swelling and inflammation.

Though you can ingest castor oil, and in order to relieve occasional constipation, it is advised to use castor oil by mixing it with different oils like tea tree oil.

Why we should consider tea tree oil with castor oil?

Tea tree oil has antiseptic qualities which reduce itching and pain. This can ease much of the pain during piles especially when it is combined with a carrier oil like castor oil.

Tea tree oil has antimicrobial and antibacterial properties which can prevent infections when bleeding and irritation occurs. Tea tree oil comes in a diluted form which can be applied directly to the infected area. But it is better to mix tea tree oil with carrier oils like castor oil which can further dilute it thus reducing the skin infections and inflammation.

You can mix tea tree oil with a few tablespoons of castor oil. After mixing, use a cotton swab to apply it directly to your swollen haemorrhoids or piles.

How to use castor oil for piles?

Castor oil can be consumed orally if you’re not mixing it with any other kind of oils. Consuming it orally helps in preventing constipation which further prevents swelling or inflammation of haemorrhoids.

If you’re mixing it with other oils especially tea tree oil, then apply it directly to the infected area with a cotton swab. It has shown great benefits in reducing inflammation and swelling and curing haemorrhoids . Castor oil may be very beneficial and when it is mixed with strong oils like tea tree oil, it completely shrinks the swelling of haemorrhoids.

But note it down that you must not consume castor oil when mixed with tea tree oil because tea tree oil could be toxic if consumed directly.

Regular application of this combination on a daily basis will completely cure piles.

When this castor oil is consumed directly, it breaks down into ricinoleic acid when it reaches the small intestine. This acid can irritate the intestinal lining.

Some side-effects also caused due to the origin of castor oil seeds. These castor oil seeds may be heavily sprayed with pesticides which reduce the quality of the seeds.

Though castor oil has a lot of side-effects too, it is still very beneficial to cure haemorrhoids or piles as it completely shrinks the swelling and inflammation. So if you are using castor oil, just be careful and take some necessary precautions while using, so you will not face any kind of problem.

The best part of castor oil is that it is not only beneficial for curing piles but it also boosts the hair growth and essential fatty acids in the castor oil help to regain the skin’s natural moisture balance. After all, it is a great natural product which you should keep at your home.

Which oil is best for piles?

Along with popular options of Frankincense and Myrtle essential oil, Castor showed significant improvement in patients having fishers and piles. Thus Castor Oil is the best and safest available option for the patients suffering from piles.

How to permanently cure piles at home?

Regular usage of 100% Organic and Pure Castor Oil helped all our patients permanently getting rid of irritation in anus area.

How can I shrink piles naturally?

Castor Oil is effective in shrinking the piles naturally without chemicals. We at Reboot With Nature understand importance of alternative medicine.

How can I use castor oil for piles?

Apart from following the traditional methods of consuming oil to get rid of hemorrhoids. Here is quick guide to apply the oil directly on the concerned area for quick relieve.

Take a Cotton Bud. For this step, you can roll a small piece of cotton on a matchstick if cotton bud is not available.

Nutritionist, Health Care Professional & Diet Consultant with a successful track record of helping people cure their ailments with natural and alternative means of healing medicine. In a nutshell, I do everything that needs to be done for your Health-related concerns and Goals.